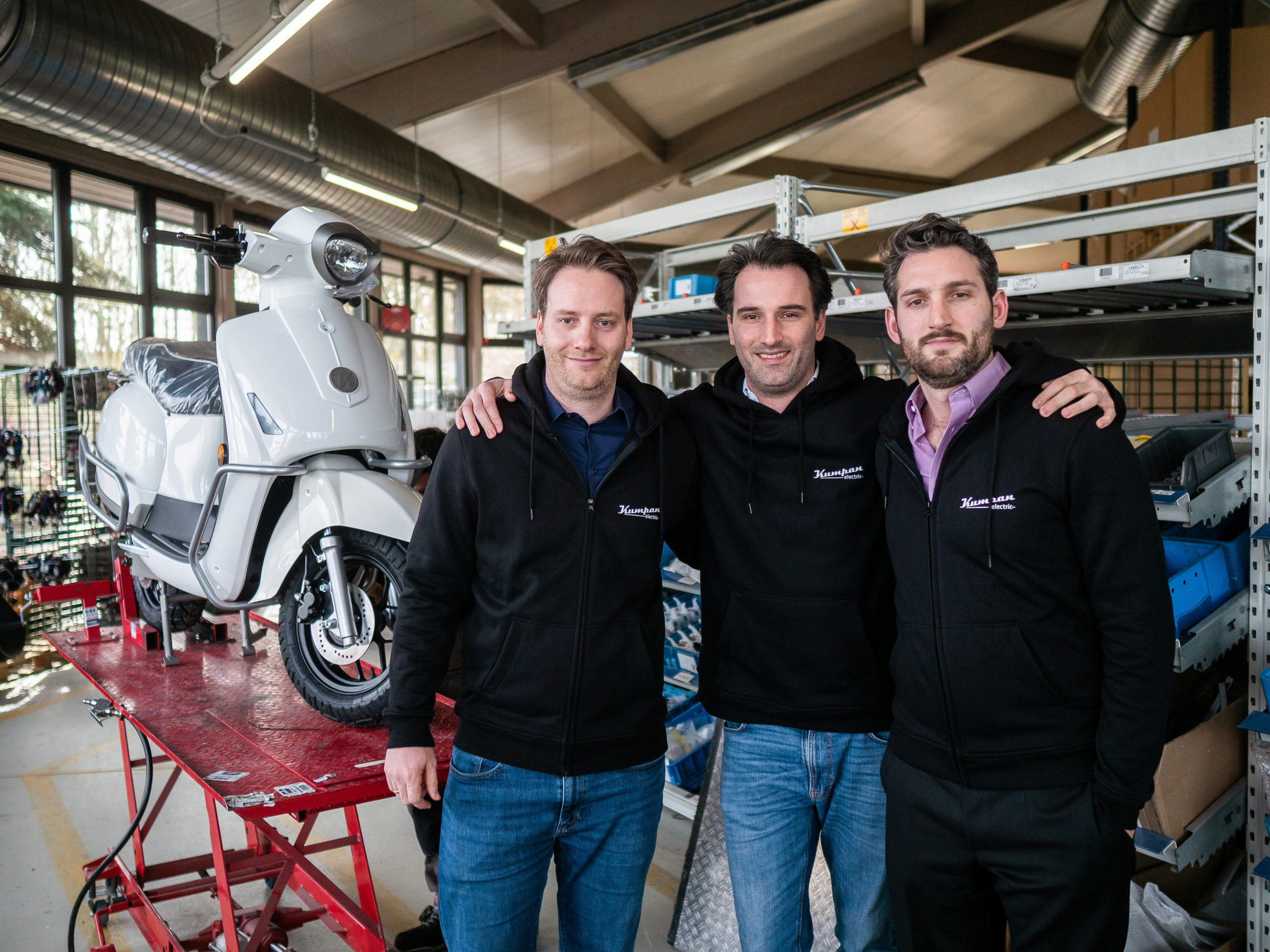 Have three founders from Rhineland-Palatinate copied from the Italian cult brand? The dispute occupied an EU court for almost four years. Now there was a groundbreaking verdict.

Co-founder Daniel Tykesson still remembers what was probably the worst day in the company history of his e-scooter startup Kumpan. In November 2018, shortly before the start of the EICMA in Milan, the most important trade fair for motorized two-wheelers. The company from Remagen in Rhineland-Palatinate actually wanted to present its new 1954Ri S model there. One projectile: 100 kilometers per hour fast and, despite the electric drive, with enough range for up to 120 kilometers.

“At the time, we made a conscious decision to have a stand directly opposite Piaggio, the famous manufacturer of the Vespa,” Tykesson told Gründerszene. The Italian cult brand wanted to show the Vespa Elettrica at the fair, the first purely electric scooter model in Piaggio’s more than seventy-year history. Everything was prepared, so Tykesson. “Technically, our model was clearly superior to the E-Vespa. We looked forward to astonished looks.”

But nothing came of it. Even before the fair officially began, the Vespa group had already ensured that the Italian police confiscated Kumpan’s e-scooters. Instead of a big show, the startup was left with an orphaned booth. A shock for Tykesson and his employees on site. Even worse: Piaggio accused Kumpan of having copied the design of the Vespa Elettrica with the 1954Ri S. The billion-dollar company filed criminal charges against the young company founded in 2010.

“It’s going to be in the millions”

Kumpan had to struggle with the consequences until last week. The legal dispute with Piaggio smoldered for that long. Now the Board of Appeal of the Office of the European Union for Intellectual Property (EUIPO) rejected the application of the Italians in the second instance.

As with the first judgment in 2020, the office relied on the fact that the freedom of design in the design of a scooter is limited overall. The vehicles would have to have two wheels, a seat, handlebars, protective shield and a cover for the engine. From the judges’ point of view, Kumpan’s 1954Ri S model had enough other distinguishing features. For example, the larger, oval-shaped screen, while that of the Vespa model resembles a trapezoid.

In an interview with Gründerszene, co-founder Daniel Tykesson is relieved about the EUIPO’s decision. “The years of litigation tied up enormous resources and prevented us from selling our model in Italy, the most important market for scooters in Europe.” It was also a challenge from an economic point of view. Tykesson does not want to go into detail about a possible claim for damages against Piaggio. “In such cases, the legal and procedural costs alone quickly add up to six-figure sums,” explains Tykesson: “If you add lost sales, it’s definitely in the millions.”

In discussions with investors, the legal dispute with the Vespa manufacturer was also often a topic. Tykesson: “Some didn’t like it, others saw it more as an accolade for our product.” However, the dispute did not prevent important funding. Since 2018, Kumpan has raised almost ten million euros in two rounds of financing. If subsidies are included, the total investment since the company was founded has amounted to almost 20 million euros.

Kumpan now offers four electric scooter models with different performance levels. The sale takes place exclusively via the homepage. The scooters are priced between 4,500 and 7,000 euros. Kumpan advertises that, unlike other e-scooter manufacturers, it mainly produces in Germany.

Co-founder Daniel Tykesson speaks of several thousand vehicles a year that the company can produce at the Remagen site: “We currently have capacity for 10,000 units in one-shift operation,” says Tykesson. The chief financial officer does not comment on sales figures. Only so much: They would be in the millions. According to data in the Federal Gazette, Kumpan made a loss of almost 550,000 euros in the 2020 financial year. In 2019 it was a little less at around 422,000 euros.

According to Tykesson, the company has broken even “several times” since then. So far, the focus has not been on profitability. Instead, Kumpan has focused primarily on growth in recent years, expanding to Belgium, Greece, Canada, Spain, Switzerland and the USA in addition to the DACH region.

And soon, after a delay of several years, Italy could also be added, the most important and largest market for scooters in Europe. 2021 were there according to figures from the industry magazine motorcycle A total of 290,000 motorized two-wheelers were newly registered – 21 percent more than in the previous year.

Kumpan co-founder Daniel Tykesson hopes to benefit from the increasing demand. “We will prepare the start in Italy as soon as we have final legal certainty,” announces the founder. That could be the case in eight weeks at the latest. Until then, the Vespa manufacturer Piaggio can again appeal against the EUIPO’s judgment. The dispute over the vehicle design would then end up before the European Court of Justice (ECJ). It is not yet known whether Piaggio intends to do this. The company has not yet responded to a request from the start-up scene.