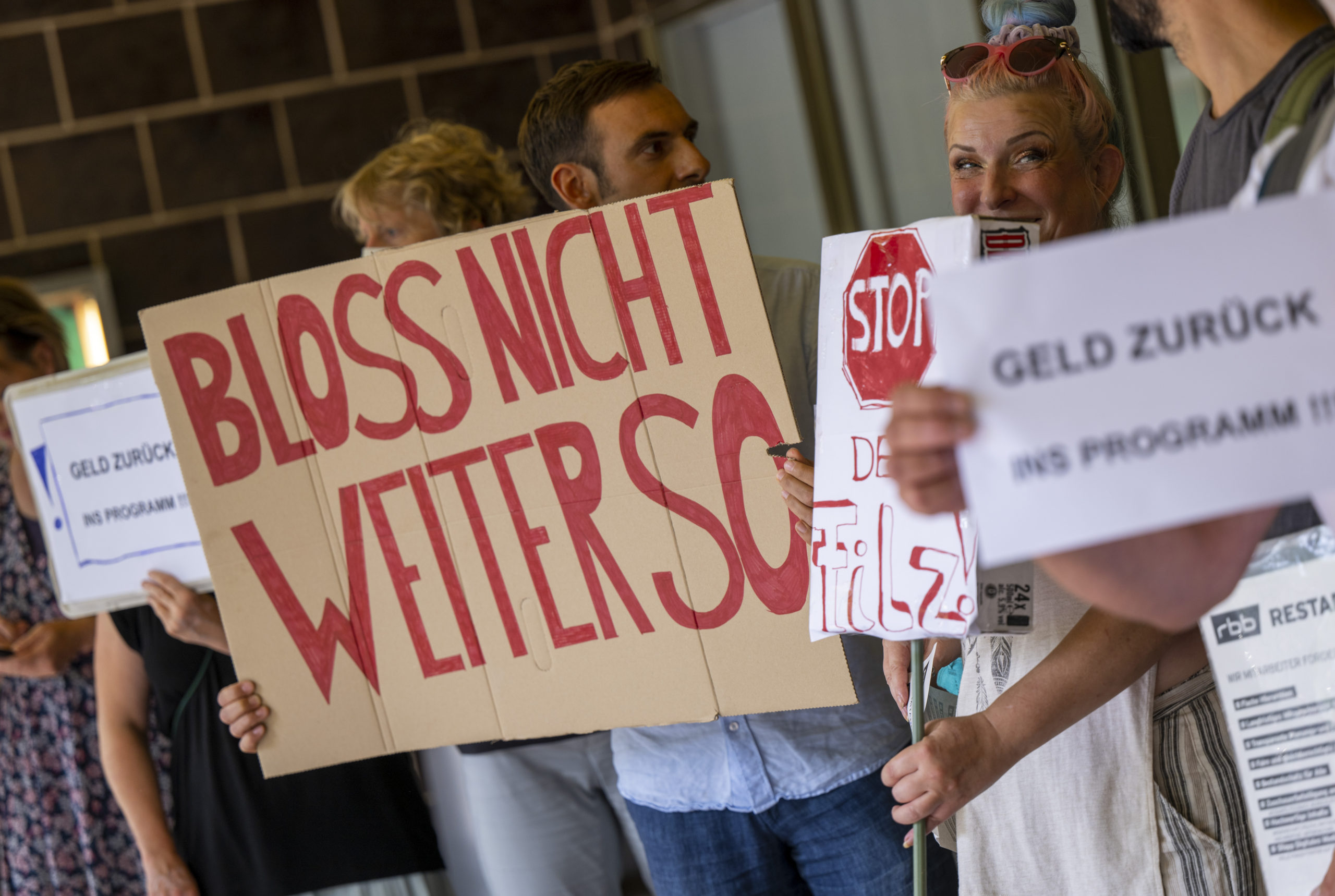 Shortly before Patricia Schlesinger’s resignation as artistic director of Rundfunk Berlin-Brandenburg (RBB), Business Insider had already reported on the existence of a bonus system that was unique in ARD.

Confidential documents are now available that have long been under lock and key and which reveal a system of bonus payments for the director and the four directors that was introduced in 2018.

The filings show that Schlesinger received total compensation of more than 300,000 euros in 2020 – before her salary increase. Of this, more than 60,000 euros went to a “target bonus”. Her successor, then administrative director Hagen Brandstätter, received variable remuneration of around 50,000 euros that year.

Every April, 27 non-tariff paid top employees at Rundfunk Berlin-Brandenburg (RBB) receive their valuable references. The grading system is quite simple. The decisive factor is whether the manager has “not met”, “almost met”, “completely met” or even “significantly exceeded” the previously agreed goals? However, there were not particularly high expectations in the public broadcaster. As can be seen from internal documents, in the past the artistic director and directors have regularly exceeded their goals – and thus received more than 200,000 euros in bonus payments per year.

Since Business Insider made public the existence of confidential bonus payments for the RBB management at the beginning of August, there has been an outraged call for transparency from the broadcaster. But even after the resignation of Patricia Schlesinger as director and her dismissal by the broadcasting council, the management is stonewalled when it comes to specific figures. “I ask for your understanding that I do not want to make any content from my working paper public,” said Schlesinger’s successor, Hagen Brandstätter, who was administrative director for many years and over whose desk every bonus payment went.

Business Insider files are now available that RBB has not yet published. The documents reveal a complex system that was introduced more than four years ago – and they show who on management is said to have received how much money. In addition to a “basic salary”, an expense allowance, a family allowance and non-cash benefits, Schlesinger received a later target bonus in 2020 – amounting to more than 60,000 euros. Overall, the records list the director’s salary for 2020 of well over 300,000 euros.

In 2021, RBB increased Schlesinger’s basic salary from 261,000 euros to 303,000 euros. Your bonus payments linked to your salary increased accordingly, so that your total remuneration rose to more than 350,000 euros. Business Insider confronted RBB with the research on Tuesday morning. A spokesman says: “With regard to the ongoing investigations by the Attorney General’s Office, we are currently not providing any information on the details of Patricia Schlesinger’s duties, which includes the question of variable salary components.”

In the past, RBB only publicly stated Schlesinger’s basic salary – without saying a word about the bonuses. While WDR and Co. publish a precise remuneration report every year and expressly state in it that the directors of the other ARD stations do not receive any bonuses or bonuses, RBB simply refrained from publishing the annual report.

Confidential special reports with the real salary figures of Schlesinger and Co. ended up at the audit offices, but they have not really been checked there yet. When asked, a spokesman for the Brandenburg State Audit Office said: “How these payments are to be assessed can only be said after an in-depth examination. In a joint letter dated July 8, 2022, the Berlin and Brandenburg courts of auditors announced that the RBB would be audited by the Senate Chancellery and the State Chancellery.”

The history of the directors’ bonuses began in the spring of 2018, when the RBB reorganized the variable remuneration for main department heads and department heads. It is now claimed that RBB wanted to play a pioneering role in ARD. According to an internal document, the concept at RBB was coordinated in a process lasting several months between Schlesinger and the chairman of the board of directors, Wolf-Dieter Wolf. This is remarkable, as the two were accused of a problematic closeness and mutual favors in the course of the RBB affair. The Berlin Public Prosecutor’s Office is now investigating whether Schlesinger and Wolf have embezzled funds. They deny the allegations.

The bonus system that the duo devised with the consulting company Kienbaum in 2018 worked like this: In the first step, Schlesinger specified the mission statement and the strategic orientation of the station. The corporate goals for the following year were derived from this. She then set her personal goals with Wolf. The Chairwoman of the Broadcasting Council was only informed of the agreement. Schlesinger then made a target agreement with each member of management, the members of management in turn with the main department heads and the main department heads with the department heads.

Wolf decided on Schlesinger’s bonus, Schlesinger on the director’s bonus

The evaluation talks then followed in March and April of the following year. Schlesinger first agreed the amount of her target bonus with Wolf, then Schlesinger with the members of the management board. In May or in June at the latest, the RBB paid out the calculated premiums. However, the formula is not very simple. As can be seen from the internal documents on the variable remuneration model, the RBB initially deducted 8.33 percent from the basic salary. This so-called “base salary” was paid out evenly by the broadcaster to the manager over the year. In April, the degree to which the targets had been met then decided on the additional bonus payment.

In the case of the new RBB director Brandstätter, according to information from Business Insider, the basic salary in 2020 was 214,000 euros, his basic salary was therefore 196,000 euros. As can be seen from the internal documents, Schlesinger rated the performance of its administrative director at the time as exceptionally good and that he had exceeded his goals. The result: Brandstäter was paid a target bonus of 25 percent of his base salary in May 2021 – around 50,000 euros. The administrative director’s total remuneration thus increased to around 250,000 euros for 2020 and thus significantly exceeded his basic salary. In his most recent statements to the Brandenburg state parliament, Brandstätter emphasizes that the RBB is “not a bonus system” but a variable salary model.

Did the new RBB director Brandstätter receive a bonus of around 50,000 euros even though he didn’t achieve the goals at all?

Explosive: At the time, one of Brandstätter’s central bonus goals was the establishment of a “green vehicle fleet”, which he emphasized at a works meeting and again at the hearing in the Brandenburg state parliament. Numerous electric vehicles and a corresponding infrastructure should be purchased in 2020. However, internal correspondence shows that there were massive problems with the procurement and the rented vehicles were not operational for months, which meant that thousands of euros in contributions were wasted.

In a comprehensive “evaluation” of October 1, 2020, the specialist level stated: “The operation of the electric vehicles is currently not possible for various reasons. No electric vehicle may currently be driven and used by an RBB employee.” Rather, the fleet management recommended a legal review of the rental of the vehicles. According to the statements of the persons involved, there was also no operation and maintenance concept in the relevant period. According to the project report, however, this was one of the defined milestones for Brandstätter’s achievement of goals. Why did the new RBB director in 2020 still receive the highest possible bonus?

When asked, a spokesman said: “Since the variable salary components are part of individual employment contracts, we do not provide any further details. However, the financial dimension does not result from negotiations, but from concrete target agreements and a previously defined one calculation model.”

The generous interpretation of the achievement of the directors’ and directors’ goals was not an isolated case at the RBB. According to the files available, all top executives at RBB received almost the maximum possible bonus payment for 2020. Schlesinger also approved bonuses of 20 to 25 percent of the base salary for the directors for program, production and law – more than 40,000 euros each. In total, each of them received total remuneration of more than 200,000 euros in 2020.

“Today it can be said,” says an RBB manager, “that everyone has made a good living from this bonus system for a long time. Both the director and the directors.” A spokesman did not leave unchallenged whether the financial dependencies within the RBB leadership meant that directors did not keep an eye on their director: “Your assumption that the directors had not made a critical contribution , for example specifically in the case of Mr. Brandstätter pointed out the risks posed by the increasing costs of the media company, is not correct.”

If the courts of auditors in Berlin and Brandenburg have their way, the windfall for the RBB leadership could ebb a bit in the future. When asked, a spokesman explained: “A sensibly designed bonus system with clear, ambitious and correctly billed goals is conducive to the success of an institution.” Ultimately, however, it is not the composition that is decisive, but the amount of the total remuneration. According to reports, the RBB should also be based on the “salary structure of the public service” because these institutions would perform tasks that are in the public interest. Because: Similar to a chamber of crafts, where the audit offices have already criticized the high salaries of the managing directors, the RBB is not exposed to any earnings risk.