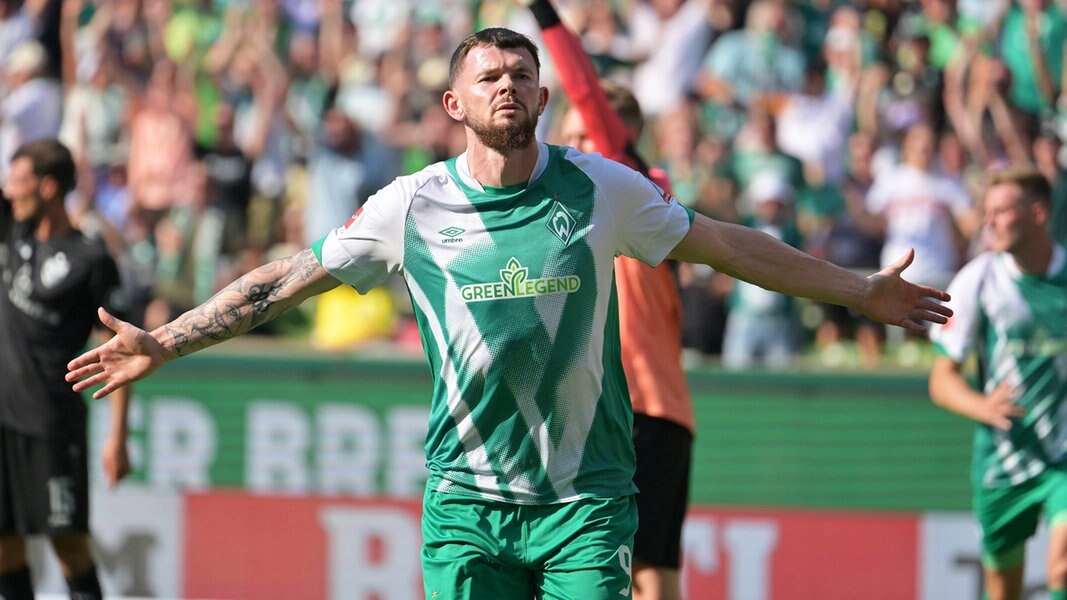 This time, however, the joy of the draw was far greater than a week earlier. There was enormous enthusiasm in the Weser Stadium. The point rescuer enjoyed his moment. “It’s a very nice feeling. Of course I’m very happy with my first goal. Hopefully there will be more,” Burke told NDR. In the fifth minute of injury time, the Scottish joker managed to equalize with the last action of the game. SV Werder celebrated the bearded man with a thumbs-up photo.

“‘Burky’ did exactly what we needed from him – the deep runs when we’re all flat and he comes in. He did a great job,” praised Niclas Füllkrug, scorer to make it 1-0, after the second draw in this season.

Like a week before, the green-whites were in the Game at VfL Wolfsburg, extremely focused and full of vigour. The difference: This time they rewarded themselves. After Marvin Ducksch had passed the ball to the left flank, Anthony Jung crossed into the middle of the penalty area, where Füllkrug resolutely climbed up and headed the ball into the top left corner to make it 1-0 (4th minute). With a bit more luck, the start would have been even better: Füllkrug, whose participation had long been questionable due to a thigh injury, hit the bar from 16 meters (9′).

It took the Swabians more than half an hour to get into dangerous action for the first time. Captain Wataru Endo tested Werder keeper Jiri Pavlenka, who played despite a broken nose, with a long-range shot (32′). Ole Werner didn’t hesitate to use his number one despite the injury. “He also holds the balls with his hand and not with his nose,” the coach had said succinctly in the run-up to the game.

In the 38th minute the Czech couldn’t reach the ball with his hands either. Endo took another shot from a similar position. Pavlenka didn’t look too happy when he scored to make it 1-1 (38th). The result also went into the break.

Bremen without momentum after the break…

The hosts came back on the pitch without their defender Amos Pieper, who suffered a contused skull during a rescue operation. There they took it much easier than at the beginning of the first half. This reticence took revenge in the 77th minute. After losing the ball in the Stuttgart half, things happened very quickly: Sasa Kalajdzic passed the ball well into Silas Katompa Mvumpa’s path and the Congolese shot into the right corner to make it 2-1 (77th). He almost made it 3-1 just a few seconds later, but Pavlenka kept his team in the game with a save.

…but then Burke is there

And that paid off very late. In the fifth minute of stoppage time, the hosts were allowed to celebrate extensively. Burke, who had been substituted just a few minutes earlier, converted Mitchell Weiser’s pass with his outside instep to make it 2:2. A roar of excitement erupted. And a few seconds later again when it was announced that the video referee had no objection to the goal.

More data about the game

The Interior Minister of Lower Saxony had requested a report on the use of the police at the Wolfsburg train station against Werder Bremen fans. more

Results, standings and matchdays at a glance. more

All arrivals and departures of the North German Bundesliga clubs VfL Wolfsburg and Werder Bremen in the 2022/2023 season at a glance. more

This topic in the program: