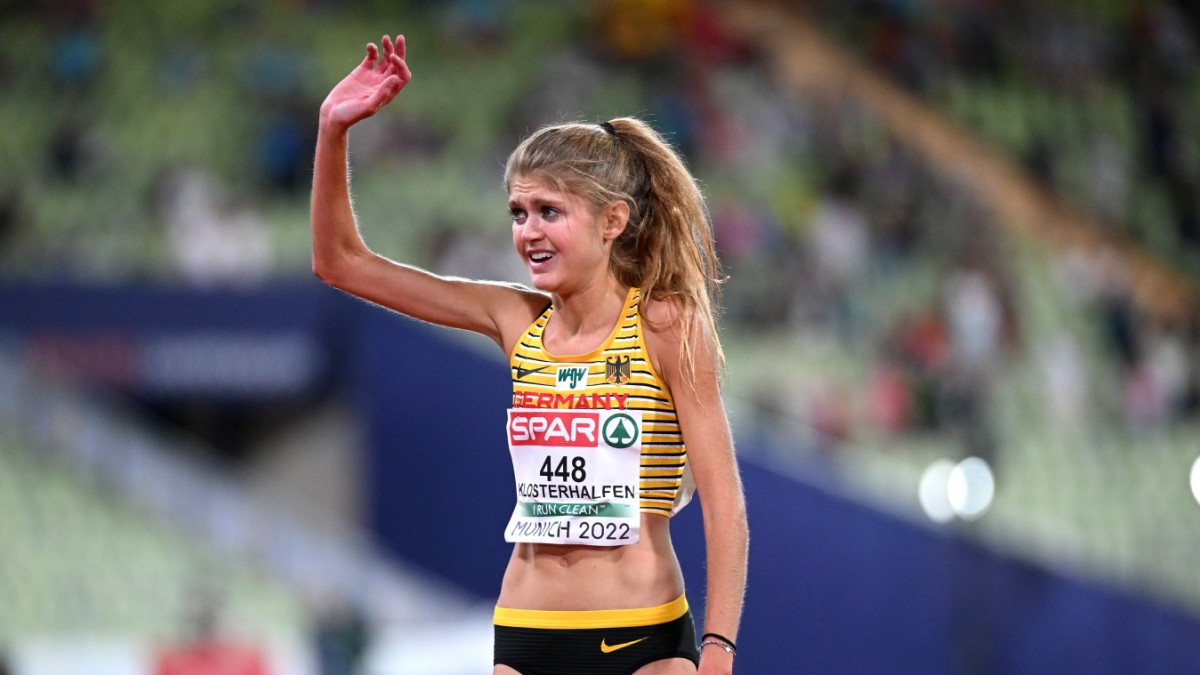 Before the 10,000 meters in Munich, Konstanze Klosterhalfen said she was hoping for a brisk race: First strolling, then a crisp sprint, that was never her core competence. The hopes were then dashed – a false start, also not customary on the longest track distance. When it worked, it actually got brisk, the Brit Eilish McCoglan did what she had last done in Hengelo with her 30:19.02 minutes: She dragged the field behind her. Many found themselves in the Grupetto early on, including Alina Reh. The second German starter fought her way to the finish line in eighth place in 32:14.02 minutes.

And Klosterhalfen: Was there when there were only five at the front after three kilometers, shortly afterwards there were four, McCoglan, Yasemin Can from Turkey, Lonah Salpeter from Israel, three weeks ago third in the World Cup marathon (!) by Eugene .

The clapping of the approximately 15,000 spectators who had endured it in the rather windy Olympic Stadium swelled more and more – until Can tore the group at the front to pieces. Klosterhalfen fought back, but still had to watch for about three kilometers how Can (gold), McCoglan (silver) and Salpeter (bronze) negotiated the main prizes. She was able to count fourth place and 31:05.21 minutes, just above her German record, as a success after a season that was rarely kind to her. A fall had weakened her in winter, and a Covid infection robbed her of a lot of energy in front of Eugene. The fact that she is approaching her best form again could also be seen from the fact that the 25-year-old also registered for the 5000 meters in Munich next Thursday.

Kaul lays the foundation for a good decathlon result

Meanwhile, the delicate German hope for a medal in shot put did not flourish either: Sara Gambetta (5th / 18.48 meters), Julia Ritter (6th / 18.29) and Katharina Maisch (8th / 18.01) remained too far behind Best performances, the 18.94 of third-placed Jorinde van Klinken from the Netherlands were too much. The 20.24 of the new European champion Jessica Schilder anyway.

Otherwise, many DLV athletes poured a foundation for Tuesday evening, on which many hopes are already piling up. Decathlete Niklas Kaul bounced strongly through day one, with 4184 points and seventh place. Nice competition with the Swiss Simon Ehammer, who was in the lead at halftime with 4661 points, accompanied by the sound of cowbells. Frenchman Kevin Mayer, world champion in Eugene three weeks ago, slipped out of the competition injured after just 100 meters.

As expected, the discus throwers Kristin Pudenz, Claudine Vita and Shanice Craft made it through to the final with confidence, but there were also some German disappointments in the qualifications: Mohamed Mohumed, for example, who was promising for the final over 5000 meters on Tuesday, was over 1500 in the preliminary heat meters without a chance. Rebekka Haase (11.50) and Tatjana Pinto (11.43) just made it to the semi-finals over 100 meters, Gina Lückenkemper was seeded for the semi-finals. It won’t be slowing down on Tuesday either.