Regular Formula 1 viewers know him. James Vowles is the mastermind in the Mercedes strategy department. And one who only appears in public when there is a need for clarification on the chosen racing tactics. For example, when his drivers question the strategy on the pit radio. Then Vowles presses the button and opens his plea with the words: “Lewis, it’s James …” Or what Valtteri Bottas probably remembers reluctantly: “Valtteri, it’s James.” The words achieved cult status. After the explanations, there is mostly silence.

Vowles is one of the brightest minds in the Formula 1 paddock. He’s an engineer, but he can also empathize with his drivers. The drivers steer, they accelerate, they push themselves and their car to the limit. “Then if something happens out of your control, I can understand the frustration. You’re full of adrenaline in the cockpit.”

Formula 1 drivers are of a different caliber

The 43-year-old Englishman knows what he’s talking about. Vowles races himself. Last year he took part in three of the four races in the Asian Le Mans Series. Teams that are successful there in their category purchase a ticket for the 24 Hours of Le Mans. The racing series is held in winter – with four four-hour races each in Dubai and Abu Dhabi. And as is well known, Formula 1 rests in winter. The change of perspective is a hobby on the one hand. On the other hand, it serves Vowles to better understand his drivers.

So much in advance: Vowles doesn’t need experience in racing cars to know how good Formula 1 drivers are. “You already know that as an engineer. But the world doesn’t realize how good the guys actually are. If you could lie to them within ten seconds, you would be doing a good job in the Formula 1 car.” The experiences he has made help him to communicate even better with the racing drivers.

The past season made it clear to him once again what Lewis Hamilton and George Russell are doing. “Our car was difficult to drive. They say they don’t know whether they’re coming through the corners or flying off. Nevertheless, they get the last milliseconds out of a car that they don’t really trust completely.” Formula 1 drivers are of a different calibre: “We drove around the racetrack with Lewis in Austin in an AMG GT R. He needs one, maybe two laps to know the limit. I days for that.

At the command post during the Formula 1 season, in the racing car during the winter break: James Vowles.

GT3 start in the McLaren

Whether professional or hobby racer: Anyone who licks blood wants more. Vowles entered the motorsport world testing Formula 4, Formula 3 and Formula 2 cars. He competed in a British Touring Car Championship. Then in 2021 he tested a Mercedes GT4 car. He was only eight tenths of a second behind the fastest driver, the reference. That gave him the next opportunity. He climbed up the next step. “I immediately fell in love with the GT3 cars. The GT4s have roughly the same engine output, but less downforce. In the GT3 you can feel the around 600 kilograms of downforce. It’s great fun.”

Anyone who tests and does a good job also wants to make it onto the starting grid of a race. Vowles wants to explore boundaries for himself. you move. As an engineer and as a passionate racing driver. “Call it a midlife crisis,” jokes the 43-year-old. So he looked for a cockpit for the Asian Le Mans Series, which was held in February 2022. He found one at Garage 59. “I didn’t know if I was going to be good enough. Every big manufacturer really shows up in this series. And then there’s me. I certainly didn’t want to embarrass myself. To quote Toto Wolff: me was not bad.”

In a McLaren 720S GT3, Vowles delved deeply into GT3 racing. And he also experienced surprises that made him smile almost a year later. “The project came about at the last minute. The car was completely new for the team.” So new that the headlight adjustment didn’t work on the first run. “The car illuminated the safety fences on the right-hand side. I couldn’t see anything of the track in the first sector.” 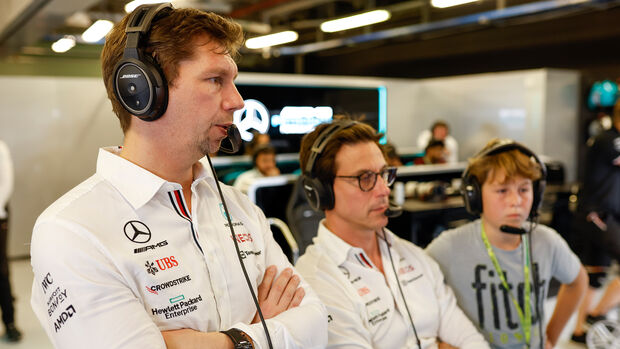 Vowles with change of perspective

The mission was a success. Vowles convinced teammates and manufacturers – and he convinced himself that he had done well as a racer. That’s why the “Mercedes Strategy Director” is aiming for more races in GT3 during the current Formula 1 winter break. Without neglecting his actual job. The first goal is a 12-hour race at the Yas Marina Circuit. The date for this is the weekend of 9-11. December. In addition, the Englishman is aiming for another participation in the Asian Le Mans Series. The races will take place on February 11th and 12th (Dubai) and February 18th and 19th (Abu Dhabi).

GT3 races are expensive. What is missing is a final grant from a donor. As a “gentleman” driver you have to contribute a part yourself. But there should still be something left over for the family’s Christmas presents, jokes the full-time chief strategist at Mercedes. Having a tactical fox in the cockpit doesn’t hurt any racing team. Especially since Vowles is a well-known name in motorsport. That brings publicity if you know how to use it. No racing contracts have been signed yet. Vowles is optimistic.

Mercedes lets him live out his passion. Maybe also because it benefits the racing team. “I also want to understand things from the driver’s perspective. What challenges do they face in the car?” The more GT3 tests he contests, the more racing experience he gathers, the better Vowles can empathize with Hamilton and Russell. “There is a huge difference between what the driver feels and what the engineer sees.” 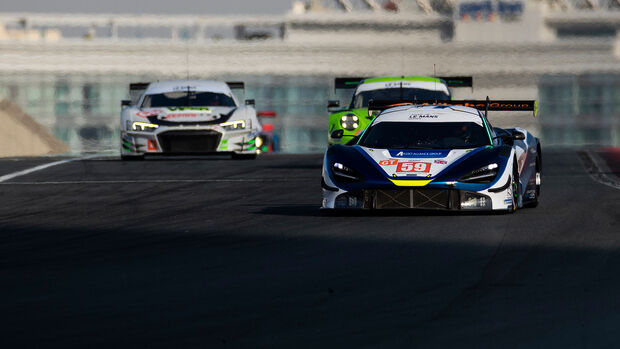 In the GT3 car – here in the McLaren – the 43-year-old forgets everything around him.

Racers let their instincts guide them. You feel things in the car that are beyond the imagination of mere mortals. Engineers tick differently. You don’t live in the world of emotions, but in the world of data. Vowles tells an anecdote from a GT3 test in Valencia that aptly describes how drivers and engineers sometimes spark on different waves. “I drove a Pirelli tire test in a Mercedes GT3 car. My engineer warned me before the exit that the brake pedal was a bit long. I thought: Okay, I can handle that,” he says.

“The first corner there goes around to the left. It’s fast and is taken in fifth gear. I brake, the pedal falls to the ground. I’m worried about my health at the moment. The answer on the radio was not that I was coming in should, but: Everything is fine, now 20 laps. That was the moment when the driver and the engineer ticked differently. The engineer looks at the data and understands what I mean. But if you pump the brake pedal twice, it should Everything must be fine. From my perspective, it sounded like he wanted to kill me. I then did three more laps.”

There are moments that widen the view. “We should pay more attention to the drivers. They put themselves at risk every time.” It is extremely important to provide drivers with information. Vowles experienced it himself in Paul Ricard during tests this week in a Lamborghini Huracán GT3. His lap times fell by up to 2.5 seconds in one stint. 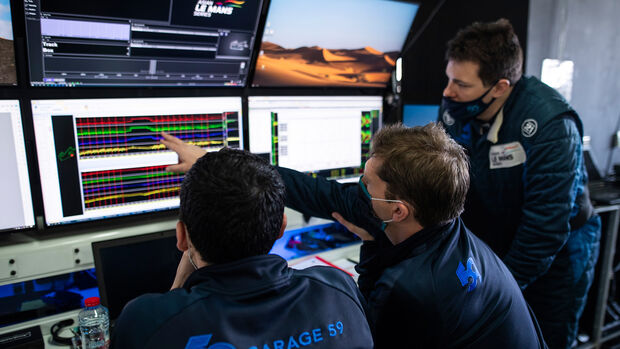 Engineer and hobby racer: Vowles reviews the data with his team.

“There were doubts. I almost lost confidence in myself. The track just got slower. But that’s why the drivers are constantly asking where they are, how they are doing in relation to their teammates. That’s why we engineers have to encourage them , and feed it with information. The engineers’ comments spiral either up or down.”

In the racing car, Vowles sometimes have self-doubt until the lap times come. However, there are big parallels to the work at the command post. “I forget everything around me in this world. You don’t think about anything else. That’s what happens to me only at the command post. There I’m so absorbed in my work. If you ask me after a race, whether it’s ten minutes or four hours I couldn’t answer it for long.”

As a racing driver, the strategist in him always thinks along with him. Driving alone does not tie up all capacity. “That’s an advantage. I’m chatting on the radio all the time. I don’t lose any lap time as a result, it actually helps me,” says Vowles. That also helps the GT strategists. “In the Asian Le Mans Series, minimum driving times are prescribed for each driver. We maxed it out to a second once. In another case, I didn’t have the pace of my teammates. I was a bit too slow, but extended the stint by five minutes. Then a caution phase was just what we needed. It gave us 35 seconds.”

Dream of a Le Mans participation

He would be missing about two seconds per lap compared to the pros. That would be respectable. “From this threshold it gets all the more difficult. Sometimes you just think: I can’t do this. That’s the most frustrating feeling in the world.” Where does he particularly lose to the fastest GT3 drivers? In the fast corners. There, where you need maximum trust in the car and in your own abilities to be able to catch a racing car that suddenly breaks away.

The best feeling? When fresh tires come to the car. “It’s like a drug for racers. It breathes new life into you. Suddenly you have huge self-confidence.” And where should the racing driver Vowles go? For the 24 Hours of Le Mans. “That’s where this journey is supposed to take me. I don’t want to go there with the intention of winning. I want to go there with the aim of finishing the race. It’s strange in that my Formula 1 life at Mercedes is all about that Winning turns. That’s why we get up in the morning. That’s why we work so hard.”