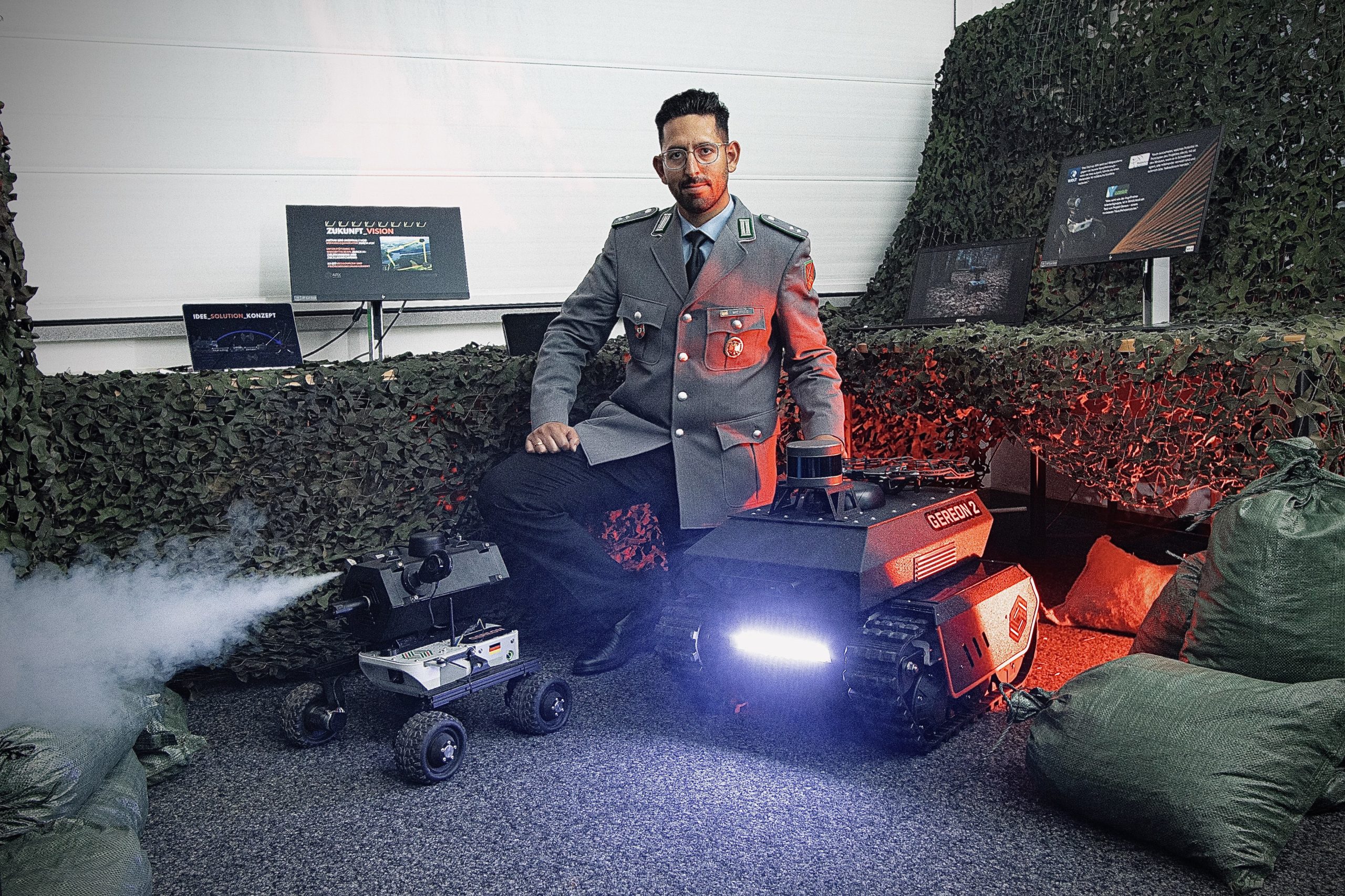 What Marc Wietfeld tells in the start-up scene interview sounds like an action film. Because part of his day-to-day work is training in forest and house warfare. In full regalia: with a gun in hand, ammo around his waist and camouflage paint on his face. He is an officer in the infantry of the Bundeswehr and knows how to fight on the ground – and what can go wrong. That is why he founded the robot startup Arx Landsysteme in March 2021.

The robotic vehicles from the Munich company are intended to help soldiers in battle to observe and deceive enemy teams, for example by imitating gunshot noises, generating artificial fog or distracting them with laser beams.

Since the start of the Ukraine war, debates about how nations can defend themselves militarily against attacks have also come to the fore in Germany. This not only calls established armaments companies onto the scene, but also startups. The drone company Quantum Systems, for example, has received a lot of attention in recent months. In the spring, it delivered some of its reconnaissance drones to Ukrainian crisis areas and subsequently received orders from governments, including the German Ministry of Defense.

Arx Landsysteme is still a long way from that. But founder Wietfeld also hopes that one day the German armed forces will also be interested in his robots. Until then, he will carry out tests with the prototypes. Also present: two heavyweights in the armaments industry, Rheinmetall and Hensoldt. According to the founder, the two companies have different priorities in the tests. Accordingly, Rheinmetall is looking at how the startup’s robots perform in the fight against tanks. Hensolt, on the other hand, focuses on the interaction between the robots and aerial reconnaissance.

The robotic vehicles should be able to monitor the airspace because they are equipped with charging stations for drones so that the batteries can be recharged again and again. The cameras installed on the robot are intended to provide an overview on the ground. With the help of artificial intelligence, they should be able to analyze surrounding areas and locate enemy vehicles.

There are two models of the robot: Gereon 1 and Gereon 2. They differ primarily in size and weight: The Gereon 1 is smaller, weighs around 12 kilograms and does not have as many functions as the Gereon 2, which has over 60 kilograms is already significantly heavier. Both devices should still be able to be stowed in the luggage of soldiers.

Both vehicles should be able to complete orders autonomously. This can mean, for example, finding an enemy and using deception maneuvers to mislead them. The AI ​​is currently being trained for this, according to Wietfeld. However, the robots should also be able to be remotely controlled from other, more distant locations such as a command center.

Lots of mini robots – instead of a big tank

The founder hopes that the devices could therefore be used in areas where larger vehicles such as tanks have difficulty accessing. Such as remote forest areas or villages. According to Wietfeld, the startup’s robots are also designed to act in combative actions in a swarm. So if a robot fails, for example because it is damaged, the remaining devices should be able to continue its mission.

The high resilience of the robots is said to be due to the fact that numerous features, such as cameras, sensors or smoke machines, are distributed over several vehicles. This lowers the unit price for a Gereon robot to 5,000 to 30,000 euros, which is cheap compared to a tank. “If a robot is damaged in combat, it’s not so tragic,” says Wietfeld. According to the motto: If something breaks down on the battlefield, it can stay where it is.

If the devices are cheap, they are also easy to replace. This is particularly important to Wietfeld and mainly has to do with the Bundeswehr soldiers who died in the Good Friday battle in Afghanistan in 2010. At that time, four soldiers were killed when they were looking for a crashed drone in an open field and were attacked by the Taliban. Wietfeld suspects that the drone should be collected again because it was so expensive and valuable and the Bundeswehr had only a few of these devices.

From high school to master and founder

In 2010, the year of this terrible event, Wietfeld was working as an apprentice at a metal construction manufacturer in Baden-Württemberg. Because he dropped out of school early, he only had a high school diploma at the time. After completing his training, he went to the German Armed Forces, got his high school diploma there, worked for the Würth Group in the meantime and then completed his bachelor’s and master’s degrees in media management at the University of the German Armed Forces. And at some point he also decided to start a business.

He made his first steps as a founder with an app that is supposed to combine political education topics within the troupe on one platform. He came up with the idea for the mini robots later, as he says, after a combat exercise. To confuse the opposing force, the founder painted black on a broomstick placed by the window. With this, the soldier successfully feigned a danger that lured the enemy troops into the wrong building.

Diversionary tactics and subterfuge are long-established tools of warfare. During the Second World War simulated the US Army such as vehicle movements and river crossings, set up rubber tanks and other artillery and caused confusion with fake radio messages. Wietfeld wants a large part of such actions to no longer be carried out by humans, but by robots in the future.

With his robot startup, he does not meet with understanding everywhere. Wietfeld is aiming for series production by the end of this year. To do this, it needs capital, which some banks have so far denied it, according to the founder. Many financial institutions want nothing to do with the armaments and defense issues. According to Wiefeld, it was therefore difficult to find a bank where he could simply open an account.

Arx Landsysteme is currently not making any sales and so far there is no VC money in the startup. The company from Munich does not earn anything from the tests with Rheinmetall and Hensoldt. The only money the company has is Wietfeld’s savings. He has invested tens of thousands of euros in equity, he says. He was also able to finance the construction of the robots because he did not pay any salaries to his nine employees. So far they have been working part-time in the start-up and are mostly employed by the Bundeswehr themselves.

The founder sees another hurdle in getting his device into the Bundeswehr. Because for this he has to pass the examination of the Federal Office for Equipment, Information Technology and Use of the Federal Armed Forces (BAAINBw). So far, procurement, with its lengthy processes, has not been designed for young, fast-growing startups to get involved. As a result, the big players in the industry such as Rheinmetall, Lockheed Martin or Hensoldt are always ahead of the curve when it comes to tenders.

The Munich-based company Govradar, for example, is working on accelerating and modernizing procurement using its own platform, including the highly complex defense sector. Small and medium-sized companies should thus have better access to government contracts.

Wietfeld is already in contact with the Cyber ​​Innovation Hub, he says. The facility was founded in 2017 and forges partnerships with startups whose products or services could be useful in military operations. So far, however, the focus of the cooperation has been his other project, the app for political education within the Bundeswehr. Arx Landsysteme has not yet been an issue. However, the interest in such vehicles seems to be there, believes the founder. Wietfeld has already received initial inquiries for his robotic vehicles, which are not yet ready for use – from the Ukraine.