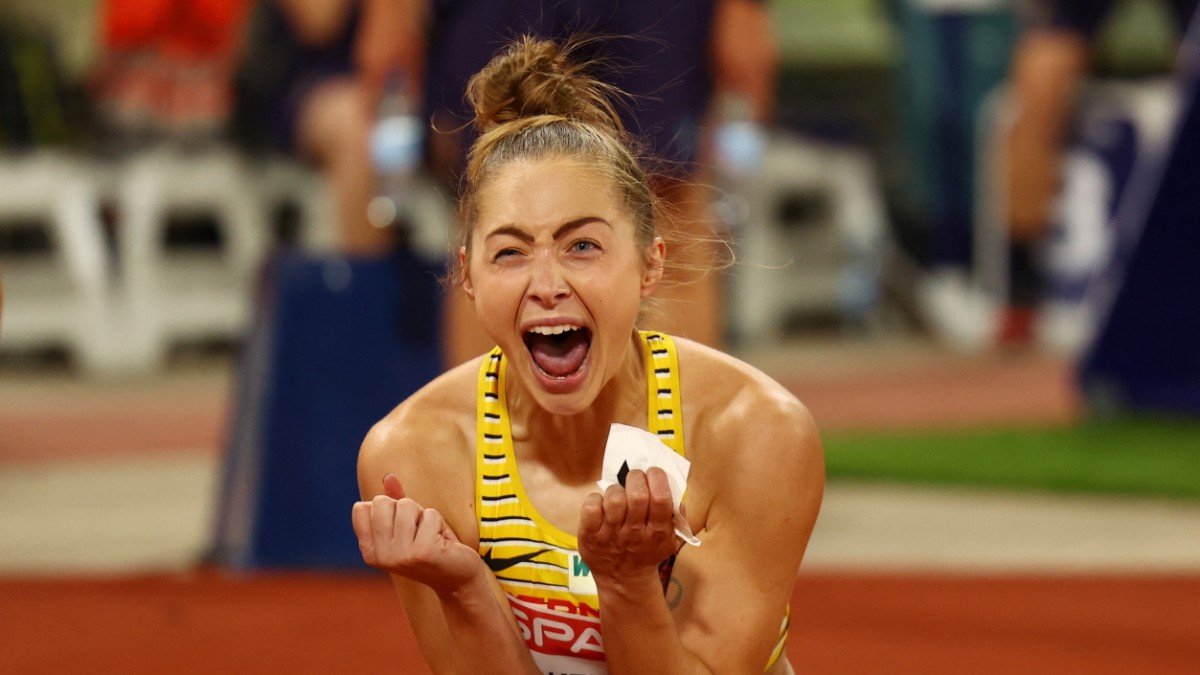 You have to have that kind of instinct first of all: to anticipate the big moment that is about to happen, maybe even to conjure it up. Many of the approximately 40,000 spectators rose from their seats shortly after 8 p.m. on Tuesday evening when decathlete Niklas Kaul from USC Mainz was ready for his third attempt at the javelin throw. It was as if they wanted to send a warm pillow of affection down onto the lawn so that Kaul’s spear would sail it especially. And then how the spear sailed.

Kaul knew right away, of course. First he cheered as the incarnate statue of Christ, then when he saw the distance – 76.05 meters, no decathlete has ever thrown further at European Championships – he gave the runabout before the curve. The audience just kept singing when the stadium director had finished the obligatory “Oh, how beautiful that is”.

Something was tipping at that moment, and it seemed almost inevitable that Kaul would later snatch the lead and the European Championship title from the Swiss Simon Ehammer in the final 1500 meter run.

“Munich will have a very, very special place in my heart from now on,” says the European champion

Tuesday evening was advertised as a great German mood maker at these European Athletics Championships, and the audience and the athletes, not just those of the hosts, did not disappoint. Except for a few places, there were not many gaps in the round, summer heat was still close over the Olympic Park, and so everything was ready for the first really atmospheric evening of these athletics title fights: for the silver medal for discus thrower Kristin Pudenz, Gina Lückenkemper’s bronze medal, dramatically transformed into a golden one in the last meters.

And then, of course, there was Niklas Kaul’s European Championship title, who in his first speech proclaimed the audience to be gold winners: “Munich will have a very, very special place in my heart from now on,” he said: “The EM is emotional title is worth a lot more than the World Championship title, so far this year there hasn’t been that much.”

The day had already got off to a good start from a German point of view, Christopher Linke had won the fourth German medal on the second day of the long-distance competitions through the city center by walking over 35 kilometers. Luck has really been on the road for the DLV up to this point, and Linke, 33, also represented the department of German walkers, which has been doing a lot of work for years. Until the very end, he had always been close to the world’s best, always just missing the main prizes that really draw attention to the athlete.

Then during the World Championships in Eugene: Corona positive, again nothing. “I think,” said Linke later, “that the secret recipe today was that I took it easy and, unlike in the past, didn’t put any pressure on myself to absolutely have to get a medal.” And then it worked, just like that.

The evening session in the Olympic Stadium started out a bit changeable at first, of the German sprinters who were recently awarded such a prize, only Gina Lückenkemper made it into the final. The La Ola wave also swept through the round quite properly, a stadium celebrated the athletes and also a bit itself. In the middle of the triumph of the Norwegian Jakob Ingebrigtsen over 5000 meters, Kristin Pudenz pushed to the first place in the discus throw, 66 .93 meters, that was also a real puzzle for the Croatian Sandra Perkovic.

But the two-time Olympic champion countered, with 67.95 meters – and almost wasn’t enough, because Pudenz immediately increased her best performance to 67.87 meters. For Perkovic it was the sixth (!) European Championship title – and for the woman from Potsdam it was huge compensation after she collapsed under the weight of expectation at the World Championships in Eugene. It even went unnoticed that Claudine Vita, who was already strong in fifth place in Eugene, won her first international medal among the active athletes with a jump of 65.20 meters.

Kaul’s catch-up race, the biggest bringer of the evening to date, was only just on record. The project had faltered on the second day, Kaul’s discus throw (41.80) was bad, but Ehammer pushed the door open again with the javelin throw (53.46), which Kaul gratefully accepted with his thundering throw. The tactics for the 1500 meters were now quite simple, Kaul had to get as close as possible to his best time of 4:13.81 minutes, Ehammer was not allowed to improve the 4:42 minutes that he managed two years ago too badly.

And while the Swiss politely stuck to that script, in 4:48.72 minutes, Kaul just didn’t slow down during his long build-up run. 4:10.04 minutes, that was a fantastic improvement even for his standards. 8545 points were enough for him in the end, Ehammer still managed a national record with 8468 points. When they announced the result in the stadium, the venerable tent construction wobbled alarmingly.

And not for the last time. Because the final punchline wanted Gina Lückenkemper, who was stuck in a not so small valley of injuries until last year, to have saved her skills for the climax once again. Left and right in the 100-meter final, she collected slightly higher-rated competitors, Poland’s Ewa Swoboda, Britain’s Dina Asher-Smith (who stumbled out of the race injured) and Daryll Neita, Switzerland’s Mujinga Kambundji, who already like the Winner looked before Lückenkemper pushed her right shoulder to the finish line: 10.99 seconds, best time of the season, her first singles European Championship gold medal. Five thousandths of a second (!) ahead of the Swiss.

How did she do that? “I honestly don’t know,” said Lückenkemper into the stadium microphone. The remaining scraps of words were lost in the jubilation.