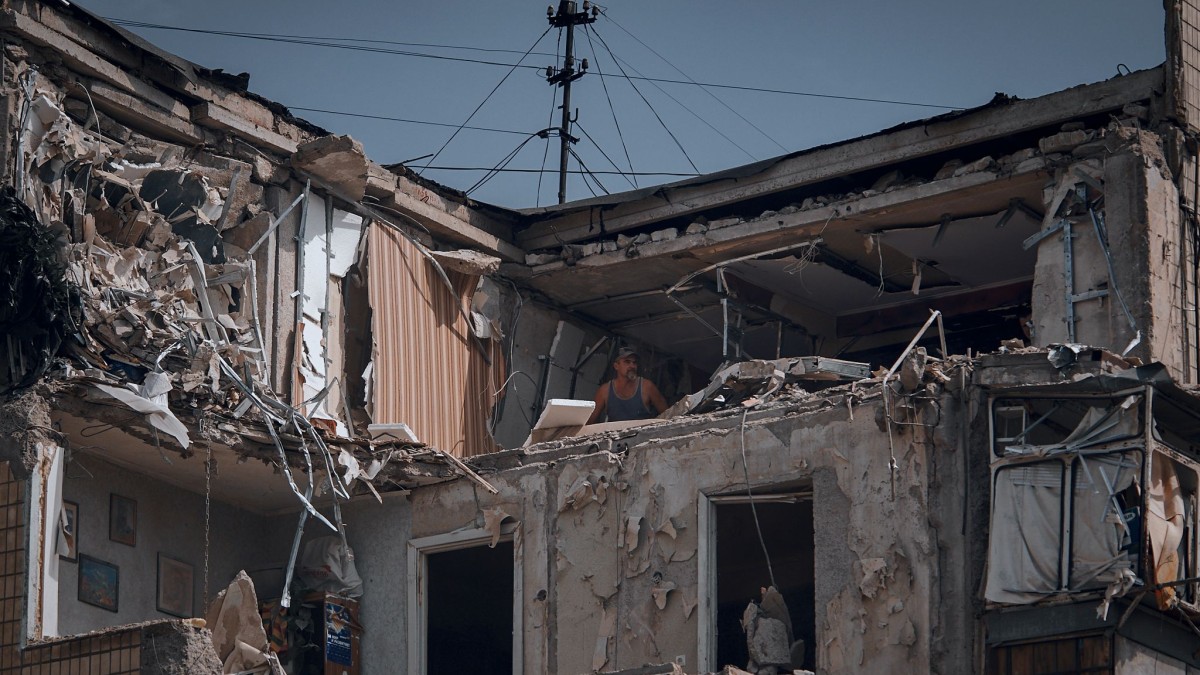 Kyiv/Moscow (dpa) – Ukrainian President Volodymyr Zelenskyj has once again urged Russia to withdraw from the Zaporizhia nuclear power plant. He once again warned of the consequences of a possible nuclear catastrophe. “Any radioactive incident at the Zaporizhia nuclear power plant could also become a blow to the states of the European Union and to Turkey and Georgia and to the states of more distant regions,” said the head of state in his video message. “Everything depends only on the direction and strength of the wind,” Zelensky said.

It is day 174 of Russia’s war of aggression against Ukraine. Europe’s largest nuclear power plant, occupied by Russia, has been under fire for days. Ukraine and Russia blame each other for this. Zelenskyy said that Russia had to withdraw from the nuclear power plant without any conditions. At the same time, he reiterated his demands from the weekend for sanctions against the Russian nuclear company Rosatom and the entire nuclear industry of the “terrorist state”.

Zelenskyj calls on the international community to act

The international community must act because it is in danger from Russia’s terror, he stressed. “If the world doesn’t muster the strength and determination now to protect a nuclear facility, it means the world will lose,” Zelensky said. If Russia wins, other “nuclear terrorists” would be encouraged to do the same. It is about protection against radioactive contamination. According to the crew representatives, no increased radiation levels have been measured so far.

Ukraine accuses Russia of “nuclear terrorism” with the shelling. Occupation representative Vladimir Rogov said Ukrainian “terrorists” would fire the shots. He had also proposed a cease-fire. However, Russia rejects the handover of the nuclear power plant to Ukraine, as demanded by 42 states. According to Kyiv, it has already attacked the power plant site with combat drones.

Ukraine has accused Russian troops of using the nuclear power plant as a fortress to fire on the small towns of Nikopol and Marhanets across the Dnipro Dam. Russia, on the other hand, claims that Ukraine is shelling the facility with drones, heavy artillery and rocket launchers. In most cases, the Russian air defenses intercept the projectiles. Nevertheless, infrastructure has already been hit in the area of ​​the nuclear waste storage facility there. According to experts, increased radioactivity has not yet been registered.

Russian defense minister and UN chief spoke on the phone

The situation around the power plant was also the subject of a discussion between Russia’s Defense Minister Sergei Shoigu and UN Secretary-General António Guterres. The conditions for safe operation of the nuclear power plant were discussed, the ministry said in Moscow. The United Nations in New York confirmed the call. Details were not given.

Russia had accused the UN of having stopped an already agreed visit by experts from the International Atomic Energy Agency (IAEA) at the last moment. The United Nations has now officially rejected Moscow’s claim. Contrary to what Moscow portrayed, the UN would have neither prevented nor blocked an operation by the IAEA. “The UN Secretariat has no authority to block or cancel activities of the IAEA,” said UN spokesman Stephane Dujarric on Monday in New York. The IAEA acts independently.

Dujarric stressed that Ukraine could protect an IAEA mission from Ukrainian controlled territory. Nevertheless, there must be an agreement between Russia and Ukraine, after all the power plant is currently on Russian-controlled territory. Recently there had been disagreements about what a route for the IAEA experts could look like. Ukraine would not allow a mission solely through Russian-held territory – such as via the Black Sea peninsula of Crimea or any other route across the Russian-Ukrainian border.

Fighting continued in Ukraine, centered in Donbass and in the south in the Kherson and Zaporizhia regions. Ukraine relies on supplies of heavy weapons from the West to stop the Russian advance, push back the attackers and liberate occupied territories. Ukraine has now received four helicopters as military aid from EU and NATO member state Latvia. The Ministry of Defense in Riga announced that two Mi-17 and Mi-2 helicopters had been delivered to the Ukrainian Air Force, some of which had been dismantled.

The donated helicopters would help “carry out military operations and save lives,” Defense Secretary Artis Pabriks said in a statement. “Western countries’ support for Ukraine must not end until it has liberated its entire territory from the Russian occupying power.”

In his speech, Zelenskyy complained that Russia’s aggression was responsible for a number of crises in the world, including in the energy and food sectors. Despite this, he was once again confident that Ukraine would win in the end.

What will be important on Tuesday

On the second day of his trip to Scandinavia, Chancellor Olaf Scholz (SPD) will meet Prime Minister Magdalena Andersson in Sweden’s capital Stockholm. The first visit will also deal with the situation in Ukraine. In addition, the planned NATO accession of Sweden and Finland should be an issue. 23 out of 30 member states have already agreed, including Germany. Among other things, Turkey is still missing, which had blocked the admission process for a long time.