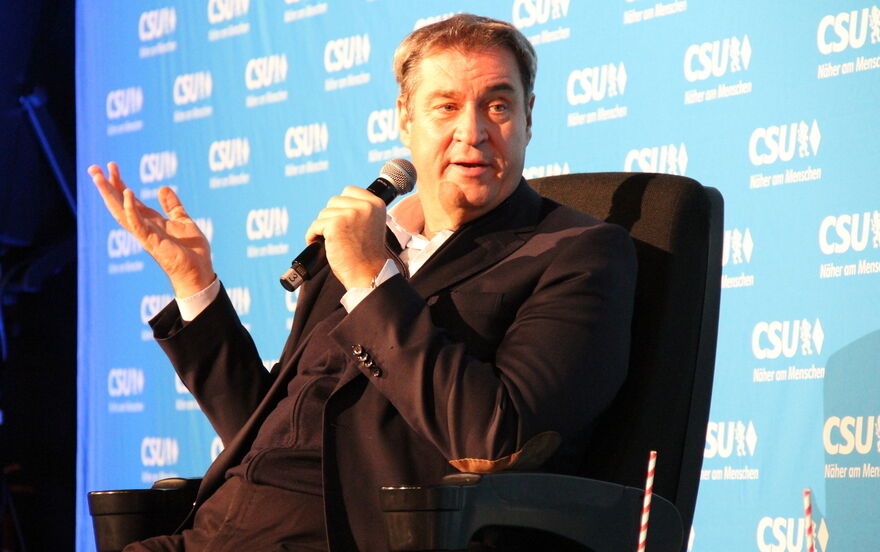 The Bavarian Prime Minister is on tour and is making a stop for a performance in Memmingen. In addition to the World Cup, it is about faith, war and the corona pandemic.

An unusually large number of police and security personnel are in the Cineplex memmingen to see. An intensive bag check is carried out before the guests are granted admission to cinema hall 8. The main actor on Wednesday evening: Prime Minister Dr. Markus Soder (55, CSU). The host: the Bavarian Health Minister Klaus Holetschek (CSU). The occasion: a cinema tour under the motto “Söder personally”. Journalist Ralf Exel will moderate the event.

Markus Söder and Ralf Exel take a seat in front of the cinema screen. In addition to the microphones, popcorn bags and drinks are also provided on the table. The cinema hall has 180 seats, almost all of which are occupied. got the first laugh Klaus Holetschek on his side when he presented old photos of himself and Söder on the screen as a welcome. Further image sequences follow in the form of a short film about Söder, then he slips into the role of the chatterer himself.

His first topic: his disappointment about the soccer World Cup and the defeat in the first game of the Germans against Japan. The World Cup in Qatar: “It’s a mistake that it was awarded there,” says Söder. He jokingly rumors about the defeat of the German team: “That was definitely due to the Dortmund defense.” Then he gets serious. He would have liked more “guts from the football players”. At the same time, he was optimistic: “We can still pack everything.”

In addition to football, he has other hobbies in which he finds “deceleration”. “I like swimming very much. I can also play tennis quite well.” He also rides a bike and owns an e-bike. As promised, the evening will continue personally, but also politically. Söder shows how he got into politics, that initially he was primarily interested in German history. Franz Josef Strauss inspired him very much.

The people who shaped Markus Söder

He was in turn influenced by Edmund Stoiber, who explained the axioms of Bavarian politics to him, and by Horst Seehofer and Angela Merkel, from whom he learned a lot. From the former editor to the youngest member of parliament to the prime minister: “I’m really proud of the beautiful country,” says Markus Söder. One thing is clear: whoever is at the top must put up with criticism in a democracy. Markus Söder talks about his faith, in which he finds strength, and about topics such as migration, citizen income, energy and the Ukraine war.

This is what Markus Söder says about the corona pandemic

The most challenging is the corona pandemic. “I saw what was coming. I felt like I was in a war situation. Bad death numbers in the morning, no more materials in the evening. In the end I was alone,” says Söder, who emphasizes that his job is also about making decisions. He still wants that.